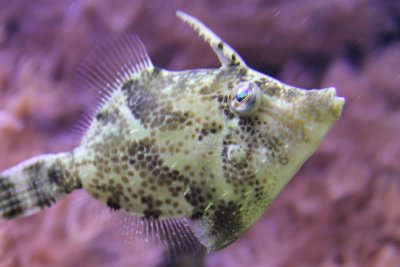 The filefish (Monacanthidae) are a diverse family of tropical to subtropical tetraodontiform marine fish, which are also known as foolfish, leatherjackets or shingles. They live in the Atlantic, Pacific and Indian Oceans. Filefish are closely related to the triggerfish, pufferfish and trunkfish….
Read Full Documentation

Instruction
1) Take the fish fillets out 20 minutes before cooking and sprinkle a little salt on them. If it is a very thick piece of fish let it rest at room temperature 30 minutes.

2) Set a cast iron or steel pan (don’t use non-stick, because unable cooking with these pans over high heat) over high heat until it is roaring hot.

3) Pour oil into the center of the hot pan. Swirl to coat the pan and let it get hot. If it starts to smoke, take the pan off the heat until it stops. Place the fish on the pan. The moment the fish hit the pan, jiggle it so the fish doesn’t stick.

4) Salt the upper side of the fish. Turn the heat down to medium-high; medium if it is a thick fillet.

5) Using a metal spatula, press down on the fish for 30 to 60 seconds. Fish tends to arc when it’s seared like this.

6) Don’t touch the fish. Let it cook undisturbed for at least a minute, possibly as many as 7 to 10 minutes, depending on its thickness. The thicker the fish, the longer the cooking time, and the lower the heat.

7) When to turn? Sometimes never. Thin fish — you can cook through without turning. You cook the exposed side of the fish by constantly spooning the hot oil over it until the meat turns opaque.

8) On thicker cuts, look at the sides of the fish and you will see the cooked portion climb up the sides; when the fish has a solid ring of browned goodness around the sides, turn. A good test is to shake the pan — if the fillet moves, you can flip. Use a metal spatula to do this flipping. Be prepared to scrape the skin off the bottom, as if it were stuck. If you have done this properly it will not be stuck entirely, but a few spots might be anyway. This is a critical step.

9) It is vital that if the fish is really stuck to the pan to let it keep cooking! It will release when the sear is perfect. Once you have the fish dislodged, turn it with the help of your free hand stabilizing the fillet on the uncooked side. Gently turn.

10) How long now? Again, depends on the width of the fish. But remember you did 2/3 of the cooking on the other side, so give it at least a minute for a small bass, 3 to 5 minutes for other fish. In most cases, your pan will be very hot, so you can turn off the heat and let carryover finish the job.

11) Add a tablespoon of butter to the pan and swirl it so it melts quickly. Tip the pan and use a spoon to baste the fish with the butter.

12) When the fish is done, serve at once: Unlike terrestrial meats, fish (other than swordfish and sturgeon) doesn’t like to rest. (Oh, and that crispy, yummy skin? It goes on top. You worked hard for it, and you don’t want to ruin that crisp by exposing it to moisture.) If you are using a sauce, it goes underneath the fish. Serve with a lemon or lime wedge on the side.

How to Prepare and Sear Fresh Fish

How to Remove the Skin from Filefish